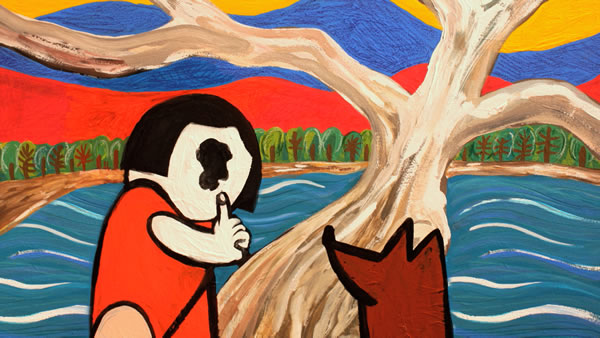 A man puffs on a cigarette and reads the newspaper, while a woman makes food, pours tea, and washes the dishes… Damn it! A woman wants a break too! A cynical animated work with an arrangement of symbolic characters, including “a man who rules with his nose” and “a woman whose face has been erased”, that refuses to accept these sorts of everyday sexist roles, and a location setting reminiscent of the garden of Eden. The mellow reggae BGM is oddly pleasant.

Born in Chiba in 1990. Graduated from Tokyo Zokei University Department of Design with a major in Animation in 2012. Graduation work, “JINGIWIKI” (12), was nominated in the Japan Tomorrow section of the 2012 Image Forum Festival. Worked at a 3DCG company and is now enrolled in the Tokyo University of the Arts Graduate School of Film and New Media Department of Animation. Is interested in creating works dealing with the theme of women, and is currently planning a new work.