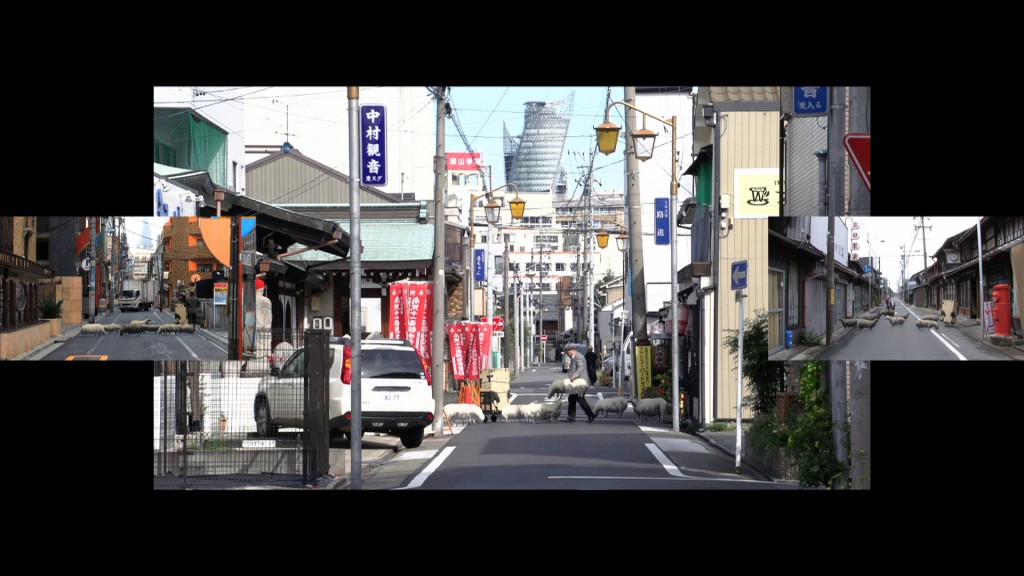 A sheep that has strayed from its flock asks the people in the city, “What is your ideal place?” The shepherd is thinking the same thing as he grazes his animals…This is a documentary film that aims to archive the landscape of the city. We borrowed the format of fiction that welcomed artist INOUE Shinta to the role of “shepherd”. This version arranges on three screens the Nagoya, Shinjuku, and Ogaki versions made by three different directors on the basis of a strict compositional scheme. （H.584）

Born in Osaka in 1984. Graduated from the Institute of Advanced Media Arts and Sciences (IAMAS). Mainly creates works with the “web” as their frame. His best known work is VOICE-PORTRAIT (09 – ), a portrait that mimics the many self-introduction videos found on the Internet. His recent works include an exhibition of an experimental work in which he sells his own portrait on the stock photo site “PIXTA”.

Born in Fukushima in 1984. A moving image creator based in Berlin. Studies film at Film University Babelsberg KONRAD WOLF in Potsdam, Germany. Previous works include ANRAKU ISLAND (11) and MR.S & DORAEMON (12). Participated in the Yebisu International Festival for Art & Alternative Visions 2015 and is currently staying in Berlin with support from the POLA ART FOUNDATION [Grants for Overseas Study by Young Artists 2013].

Born in Osaka in 1969. Creates works across various fields such as cinema, media art, and documentary film. Also actively collaborates with artists in other fields such as stage and fine art. Supervisor of the DVD label “SOL CHORD”. Professor at the Institute of Advanced Media Arts and Sciences (IAMAS).

A film production group formed around Maeda Shinjiro at IAMAS in 2006. Its activities include collaborative works with artists and composers and films recording stage productions. Works include Inoue Shinta’s PROJECT OF SHEPHERD IN OGAKI (06) and Yasuno Taro’s MUSICINEMA OGAKI (08).